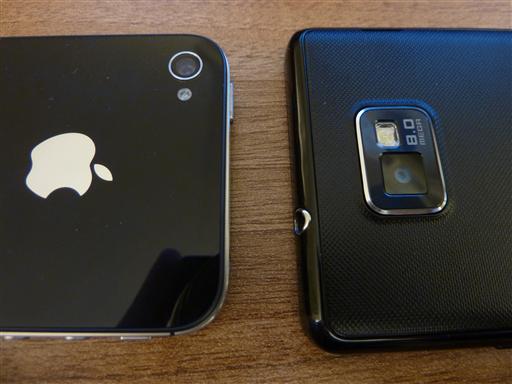 With the introduction of the iPhone 4S, Iâ€™ve been keen to see how it compares to one of Samsungâ€™s flagship devices, the Galaxy S 2.  Of the many aspects of both phone to compare, I was most interested in which had the batter camera in terms of both videos and photos, so I tested them out!

Let me start by saying I am nowhere close to being a â€˜greatâ€™ photographer, so when I take pictures, I pretty much just frame the shot and click.  Sure, I know enough to manually adjust ISO and shutter speeds (when using a camera that allows it) to try and compensate for certain lighting situations, but thatâ€™s about all I know.  In other words, my observations of which camera is better should be taken with a few grains of salt (someone else may have been able to frame my sample shots better/etc to make them turn out better); think of me as just an average person taking photos/videos with their phone (because I am!).

To try and make as true of a test as I could, I strapped both phones to a piece of double cardboard (one right above the other) and had both cameras vertically lined up.  My idea was that this would allow them to take as close to the same photo/video as possible: 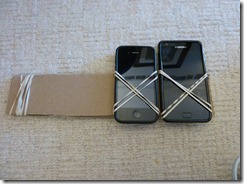 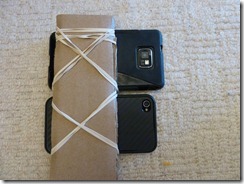 Both devices have a maximum video resolution on the rear camera of 1920×1080 – however, the Galaxy S 2 allows you to adjust the recording resolution to lower resolutions as well (ie, 1280×720, 640×480, etc) whereas you are stuck at the full 1920×1080 on the iPhone.  While by itself thatâ€™s not really an issue, it could become one once you start to add apps, photos, and music.  On the iPhone, each second of video takes up approximately 2.89MB (thatâ€™s about 173MB a minute), and given that thereâ€™s no expandable storage options, I would have liked the ability to take lower quality videos (if even at 1280×720) if I wanted to conserve space.

That being said, after taking a video of the same scenes with both cameras, itâ€™s my opinion that the video quality of the iPhone is better than the Galaxy S 2:

(note that in the video above, I had to make some adjustments during editing to try and have a good even â€˜cutâ€™ between both clips and therefore had to push the SGS2 clip up a bit in the frame â€“ thatâ€™s not an issue with either phone but rather the way I took the videos with my â€˜cardboard rigâ€™)

The colors on the iPhone are less washed out, bright scenes (like when looking directly at the sun) donâ€™t create as much â€˜lens flareâ€™ (is that the right term?), it focuses much faster and accurately, and with its video stabilization thereâ€™s much less jitter.    The Galaxy S 2 does have a couple advantages, however, such as being able to choose lower resolutions to record at, having a slightly wider angle, and a few different color effects (sepia, negative, b&w, etc).

Theyâ€™re very close and itâ€™s hard to say which one produces better quality photos overall.  As with videos, the iPhone 4S can only take shots at itâ€™s maximum resolution of 8MP (3264×2448) whereas the Galaxy S2 (same max 8mp res) can take lower res shots; though, unlike with videos, I canâ€™t think of a situation where youâ€™d ever want to take lower res shots, so thatâ€™s a non-issue to me.

Here are a few sample shots (iPhone 4S will always be on the left, Samsung Galaxy S2 on the right): 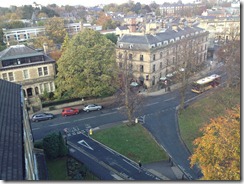 Here we have a simple shot at the streets below my balcony.   In this particular example, the colors are more vivid on the SGS2, while the tree line where it meets the sky seems less washed out on the iPhone (but, perhaps thatâ€™s because there was â€˜lessâ€™  bright sky in the field of view on the iPhone while it was focusing, thus helping the resulting iPhone photo?) 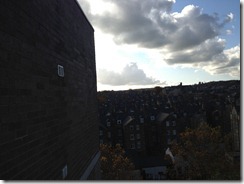 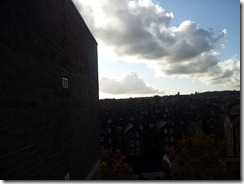 This is taking a picture of the side of my building with the bright sun just around the corner (to see how it does with light and dark objects in the field of view). Other than the iPhone making itâ€™s picture a tad brighter, they both look the same.  (iPhone was ISO-64 1/1905s exposure, SGS2 was ISO-32 1/1479s exposure) 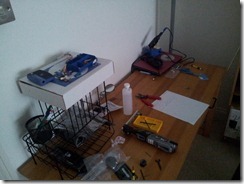 In this room, itâ€™s fairly dim, so I figured this would be a good â€˜indoorâ€™ photo test.  The SGS2 photo is a bit darker and looks a bit noisier even though it was shot as ISO-400 and 1/17s exposure vs the iPhone which was at ISO-800 1/15s exposure. 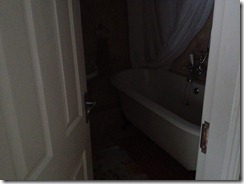 Here I tried taking photos inside my very dark bathroom.  As in the previous photos, the SGS2 was a bit darker though Iâ€™m not sure if it looks noisier or if itâ€™s just cause itâ€™s simply darker, but the iPhone shot does look slightly better (if not, at least brighter) and both images had the same iso/exposure as above. 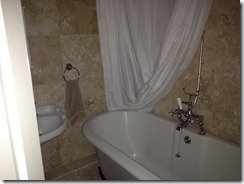 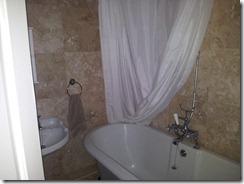 Here we have the same dark bathroom photo only this time with the LED flash enabled.   This time, the Galaxy S 2 seems to have taken the better photo as itâ€™s a bit brighter while also sharper with more defined colors.   The Galaxy S 2 was at ISO-125 and 1/20s exposure with the iPhone 4S at ISO-250 and 1/16s exposure. 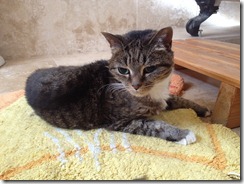 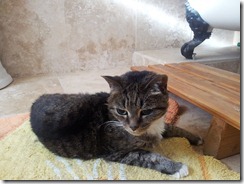 Both phones have their advantages over the other in this department.  The great thing about the iPhone 4S is itâ€™s zero shutter lag and itâ€™s ability to access the camera from the lock screen.   For the shutter, as soon as you tab the shutter button, the iPhone almost instantly focuses and takes the photo â€“ however, on the Galaxy S 2, it takes about a second to focus (or sometimes longer if itâ€™s poorly lit) and up to another second for it to take the shot.   And for the lockscreen, I absolutely love the ability to access the camera by double clicking the iPhone home button and tapping the camera icon and very much dislike the fact that I have to unlock the screen and wait for the camera to load on the SGS2: 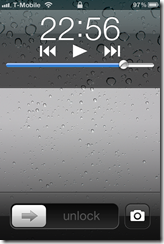 Then we have the Galaxy S 2 where one of itâ€™s main advantages over the iPhone 4S is itâ€™s numerous photo and video mode options.  While the iPhone 4 just has the ability to show a grid or use HDR, 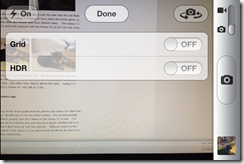 the Galaxy S 2 has a multitude of features such as smile/blink detection, panaramic, beach, sunset, fireworks, manual ISO/white balance/exposure/color effects:

To see all of the features, be sure to check out my in depth review of the SGS2 and scroll down to the camera section.

When speaking strictly about quality from the photos and videos Iâ€™ve taken the past few days, the iPhones 4S has the better camera.  The iPhoneâ€™s videos are much smoother thanks to itâ€™s stabilized lens, and the photos (on average) come out to be a bit more clearer/sharper.  Itâ€™s not substantially better, nor in anyway is the camera on the Galaxy S 2 bad, but itâ€™s still better.   That being said, Iâ€™ve been using the S2 for 6 months now and have been plenty satisfied with it as a camera when I donâ€™t have my â€˜realâ€™ one with me.  The Galaxy S 2 does, however, win in the category of feature or the camera with itâ€™s ability to take photos and videos at varying resolutions, being able to manually choose the ISO/exposure/white balance/color options, as well as various scene settings such as beach/portrait/fireworks/sunset/text/etc.

In the end, based on the photos and videos I took above, it is my opinion that the iPhone 4S does have a better quality camera/lens.    Do you have one of the devices and think otherwise, or perhaps you agree?  Do you have any sample shots or videos that youâ€™d like to share?  Any questions or requests for me to take better samples or comparisons?  Let me know in the comments!