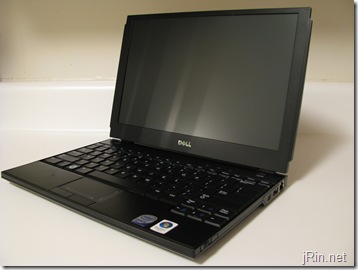 As one of Dellâ€™s newer additions to the Latitude family, the E4200 is a welcome edition to the realm of ultra portable notebooks.  Until recently, if you needed the small form factor of an ultra portable, you had to sacrifice performance, but no longer with the E4200.  While this not to say that E4200 offers the best of all worlds, itâ€™s certainly a good sized step in the right direction.  I was able to have two different configurations on hand to review â€“ one with a 128gb ssd, 3gb, 6 cell vs a 64gb, 2gb, 4 cell:

First, here are just some different angles/views of the E4200: 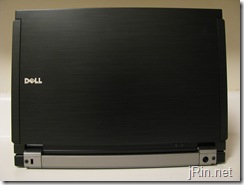 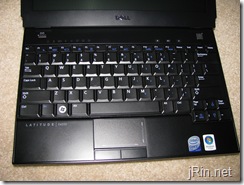 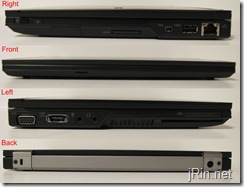 All things considered, I expected this laptop to be a bit sturdier than I found it to be.  This is not to say that it necessarily felt cheap, or seemed like it used low quality materials â€“ rather â€“ based on how sleek it looks, I expected it to be more than it was.  Given it has a â€œMagnesium Alloy LCD back and baseâ€, I I was surprised to see how much flex there was in the screen pressing my finger into the center from the back (it feels slightly â€˜strongerâ€™ than the Lenovo S10).

Since owning a Lenovo X61s now for a few months, I have been spoiled by the great keyboard it has so I was also a bit disappointed at the overly â€œplasticâ€ feel and non-rigid keys (non-rigid in the sense that if you place your finger on a key, you can slightly move the key around in a circular motion â€“ more so than on my desktop keyboards or x61s).

All that being said, everything else was well built.  One annoyance I have is when the battery is a bit loose and can wiggle around a bit, but I was quite pleased to find that the batteries in both e4200s were a tight, well secured fit.  The rest of the chassis was as good as any other laptop:  sturdy, and no way to really â€œsqueezeâ€ and flex anywhere (other than the screen and a bit on the keyboard).

One of the major differences this laptop had over most previous laptops Iâ€™ve seen in the past is the addition of an eSata port.  However, this eSata port also doubles as a USB 2.0 port, so luckily it does indeed have 2 USB (and not just 1 like I originally thought).  Another nice addition to this laptop that I have yet to see with other ultra portables is that Dell includes an eSata optical drive (CD-RW/DVD-ROM by default).  Itâ€™s your standard size self-powered optical drive, but it is nice that it is included (and interesting that itâ€™s eSata as opposed to USB) and it even comes with a carrying case (the charger in the picture below is for the laptop, not the optical drive).

For being a an ultraportable and ultra low voltage processor, this laptop is a great performer.   Both hard drives are MLC SSDâ€™s: 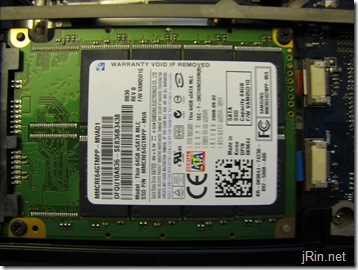 See below for PI times, HDTune, etc for the 128gb SSD version — unfortunately, I lost the data I recorded for the 64gb :(

Battery life was a tad lower than I was expecting, being it is a low voltage processor, smaller screen, and SSD, but considering itâ€™s small size yet respectable performance, I could live with it (but of course one could lower the brightness, turn of bluetooth and/or wifi, etc) â€“ below are battery eater pro readings:

And yes, the 6 cell does stick out about an inch, whereas the 4 cell is like a couple millimeters (4 cell stacked on top of the 6 cell):

And of course, as I am always curious, how much added weight must you deal with in order to get the ~1.5 hours?  A little more than half a pound:

The screen/lid itself is rather thin and the hinges are sturdy, all metal, but with the lid closed it does have a little play in that if I were to hold the laptop upside down, the lid will open about 1/4 of an inch.

The viewing angles also werenâ€™t quite what I would consider great.  I found myself having to keep looking at the screen dead in the center otherwise Iâ€™d notice some washing out at at the edges of the screen.  However, the wide range of brightness levels was large, and in reality you could probably set it at 4/8 and it would be just fine (as opposed to 6/8 that I used for my battery tests) 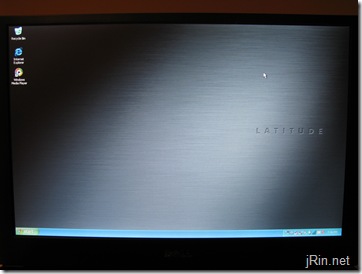 However, I did enjoy the fact that this does not have a glossy screen, rather it is matte! (though, this is of course just my personal preference!)

All in all, with all things considered, when compared to other laptops of itâ€™s class (such as the Samsung X360) I would say that this ultra portable laptop ranks near the top of the lists (I say near because I have not been able to personally review other similar laptops â€“ only basing that from what Iâ€™ve read about others).  I think what would really let this laptop outshine others in itâ€™s class would be the price (if you go refurbished at least).  Both of these e4200â€™s were under $750 from the Dell Outlet, which easily undercuts the Samsung X360 (which beats even the 120gb non-ssd version) â€“ not to mention, the e4200 comes with a portable optical drive! 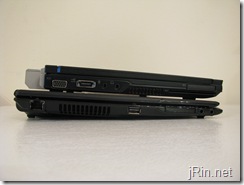 Would I recommend buying it?  If you are absolutely trying to get best performance + smallest size + smallest budget, sure â€“ I donâ€™t see the samsung x360 or the sony tz coming close to the e4200â€™s price point anytime soon for the same similar size/performance.  However, while I am currently playing around with the Dell Latitude E4300 (13.3â€), I would say for spending the same amount that an E4200 would cost and only adding about a pound in weight (if you are okay with that), Iâ€™d get the E4300 (stay tuned for a review!).