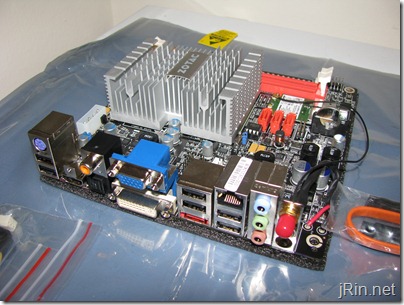 The Zotac IONITX-A-U is a motherboard + cpu + graphics combination that is perfectly suited to meet most HTPC needs:  It uses very little power, has HDMI â€“ DVI â€“ VGA â€“ eSata â€“ Optical/Coax audio â€“ Wifi â€“ 6 USB, nVidia ION graphics, comes with a power supply, and has the added benefit of being of the mini-itx form factor.  But can such a small package deliver where it count?  Yes!

I bought the IONITX-A-U to serve as my HTPC, and more specifically to be an HD-DVR.  Previously, I was using a bit more powerful of a setup:

Running 24/7, using a Kill-a-watt power meter I figured out it was costing me about $135 a year to run that system.  Since all I was really using the computer for was to be a DVR/media box and for nightly backups of my computers, I soon decided it was a bit overkill on horsepower and energy usage.  At the time, I had just begun to hear about ION and itâ€™s ability to handle 1080P HD and such so I figured Iâ€™d give it a try;  the potential of having an HTPC that sips power at the mini-itx size was just too temping for me. 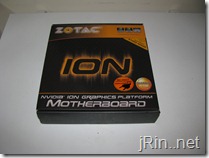 is the same as the A-U, just without power supply and is a bit cheaper).  The fan supposedly isnâ€™t required assuming you have the proper case fan setup, but seeing as how I am using a tiny case with everything packed in tight, I wasnâ€™t about to try:

You canâ€™t buy a mini-itx motherboard and not get a mini-itx case, it just seems to defeat the point.  Unfortunately, you canâ€™t really find a cheap $20ish mini-itx case as you can with standard ATX/mATX cases.  After looking through dozens of cases, I finally decided to go with the Mini-Box M350 case:

What made me choose this case was mainly itâ€™s TINY size of 7.5â€ x 8.3â€ x 2.5â€ which nicely complements the IONITX-A-U.  Also, it has VESA mounting holes which would work great for mounting it to the back of smaller TV’s (larger TV’s have a VESA hole pattern larger than the case itself).  It is also pretty open, and by that I mean there are many holes, which has been working just fine for my setup (temperature wise) — though others suggest it hinders proper air flow.   I could write much more about this case â€“ and I will in a review following this one â€“ just know that for this Ion setup, it works great.  However, if you want a built in optical drive youâ€™ll have to find a different case as there is no room for one in this case.  I opted to instead buy a external slim usb blu-ray player so I could travel with it should I ever want to.

One of the main advantages to using this as an HTPC as opposed to building a â€œnormalâ€ computer is for itâ€™s energy savings. In Baltimore, I am paying about $0.20/kWhr including service and delivery so Iâ€™ve started to be conscious about my energy usage. (out of curiosity, what does everyone else pay??).  On paper, the processor itself sips along with a TDP of a mere 8 watts — compare that to the latest â€œnormalâ€ low power desktop chips:  Intel Celeron 430 35W

in comparison, here are some energy measurements of my Dell Studio 14z, Core 2 Duo P8600 laptop:

Okay, so the main questions that I had before buying it were:

You may also be wondering if it can play a variety of games and the like, but this setup is not meant for gaming (the processor just really isnâ€™t powerful enough).  Sure, you could play with the lowest settings and resolution with older games  â€“ but donâ€™t plan on doing any â€œrealâ€ gaming with this rig.

At times, however, I do notice a bit of lag when performing normal tasks.  If I am browsing around the web and open multiple tabs, it is a bit sluggish when switching tabs and loading websites with a lot of rich media (flash, etc).  Iâ€™m not saying it canâ€™t even handle web browsing, Iâ€™m just saying that compared to my core 2 duo laptop, I do notice a slight hesitation when switching between multiple tabs/etc.

That being said, all the menu navigations in Win7 media center, menu navigation/playback within Media Player / Power DVD for movies (dvd and bluray) are also fine, etc.

1. The I/O shield.  I had to take my dremel and cut away some of the metal around one of the circular port holes. The hole where the included WiFi antenna is supposed to go was cut by the factory to be not-so-quite round (notice the flat edge on the right of the right most column of circle cutouts).  I had to take my dremel and basically file/cut it down so it would be circular enough to fit the nut of the antenna mount:

Now, this is kind of a big deal â€“ without this being cut out correctly, the motherboard canâ€™t sit up in/against the i/o shield properly â€“ notice the gap: 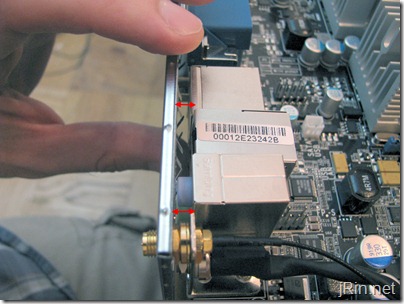 Hopefully, I just got a bad i/o shield due to random manufacturer â€œerrorsâ€, or perhaps, theyâ€™re all like this â€“ I donâ€™t know â€“ just be prepared to maybe have to do this too!

2. 3xSATA power cable.  The included SATA power cable is a Molex connector on one end, and then has 3 rather long SATA power connections sprout from it.  However, this will only be an issue depending on the case and number of devices you install — with the M350 case I was using, there just wasnâ€™t enough room to have 3 SATA power cables running around inside: 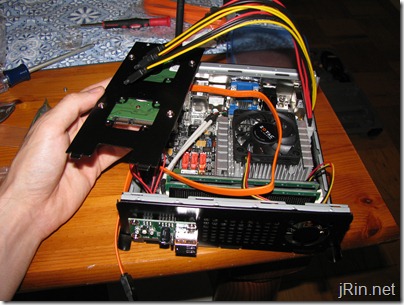 So, I had to get some spare sata power cables and splice and dice em to make one that was just long enough to go from the motherboard connection to the hard drive: 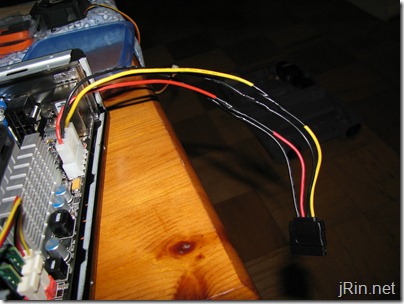 Again, this isnâ€™t necessarily a â€œfaultâ€ with the product, itâ€™s just another thing youâ€™ll want to keep in mind when building such a system!

If you are looking for an HTPC setup that has a small footprint, uses little energy, and doesnâ€™t cost TOO much (probably cheaper than a year of HD TiVo + the TiVo box, not including a usb bluray player), then a Zotac IONITX-A-U build is definitely something you should consider.  Using it as an HTPC you will have no problem with watching and recording SD and HD, playing back DVD | Bluray | Amazon Video on Demand

| Netflix Streaming, listening/streaming music, and web browsing.   Using it as a â€œbasic usageâ€ computer would also be fine, such as word processing, web development, very light gaming, chatting, light photo editing (resizing, touching up, etc), and even light video editing (windows movie maker) and youâ€™ll be fine.   Itâ€™s when you want to start video editing (adobe software), play games with any advanced graphics, heavy photo editing (photoshop-eque programs), is where you will start to exceed the ability for this setup. Could you still do all of that? most of it, yes  if you donâ€™t mind things being slow.

*Note â€“ the speed of the hard drive I am using is likely causing more lag than would normally exist with a 7200rpm or SSD drive, which in most computer setups, the hard drive is one of the speed bottle necks.  That being said, even with my 5400rpm drive, I am still able to perform media center tasks just fine.

In short, if you are looking for an HTPC, this will work great â€“ just be sure to get a mini-itx case to complement the setup!