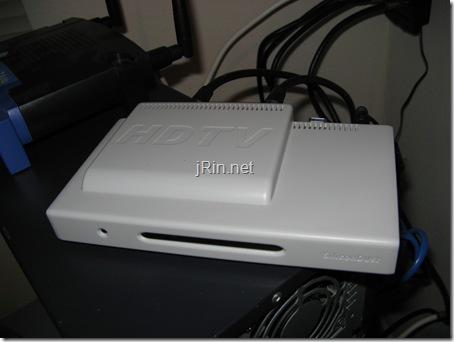 I just got an HDHomeRun (product home page) for Christmas and this is one of the greatest things since the internet! — now if only there were more HD (high definition) channels broadcast in clear QAM (cable) or OTA (over the air / antenna)!  I’ve been using it for about a week now, and love it — I’m able to watch live HD on all my networked (wired) computers, while only paying for standard cable!  Just make sure you have good cable signal (or antenna reception)!

HDHR (HDHomeRun) is a dual HD tuner that you plug into your home network and then any of your computers can connect to it and watch HD (or any digital broadcast) stations!  What makes this especially great is that it is able to play back clear (unencrypted) QAM, as well as OTA, programming — what exactly is a QAM tuner you ask?

An integrated QAM tuner allows the free reception of unscrambled digital programming sent “in the clear” by cable providers, usually local broadcast stations; however most digital channels are scrambled because the providers consider them to be extra-cost options and not part of the “basic cable” package.

[Read more about QAM from Wikipedia]

What that means is that if you subscribe to cable TV and they offer HD programming (free or pay), any broadcast station (one that you should get via an antenna, such as ABC, NBC, FOX, WSB, etc…) must also be sent over the cable line “in the clear”, meaning that you do not need to have a cable box to receive it.  Also, depending on your physical location compared to the local TV station antennas, you can get HD and digital programming from your basic TV antenna as well (free!).

My TV already has a QAM tuner, what makes this so different?

Your TV may already have a QAM tuner (as mine does) — however, your TV’s QAM tuner can’t stream to any computer in your network, nor does it allow for connection to a HTPC for DVR (ie: TiVo) capabilities like the HDHR can!  Paired with a computer with good DVR software, this can act as two tuner sources for you to record tv.  HDHR plays nicely with Windows Media Center, Vista Premium(s), BeyondTV (what I use),  SageTV, and MythTV.

Re-worded, having a HDHR and a computer with DVR software, it is like an HD Tivo or a cable company’s DVR, without having to pay any extra monthly fee’s for HD or DVR service!  Though, granted, you have to pay for the HDHR (which is about $170), a relatively powerful computer, and possibly DVR software depending on which you want to use – software titles such as BeyondTV ($50) and MythTV (free) are better than even Tivo, at least in my opinion.

How I have my HDHR system setup:

The computer I am using is an old P4 system placed in a Dell Dimension 2400 case (to try to keep it quiet) — the computer alone (not including the HDHR or TV) cost around $300, with individual (used) prices. I paid, in red (for reference):

Now this computer is RIGHT at the verge of being too slow to effectively watch+record HD, and I would almost say it is too slow — when doing any guide updates, cpu utilization is at 100%, and browsing any of the Beyond TV menus (guide, recorded shows, etc), it’s VERY choppy.  However, even when the computer is fully bogged down (100% CPU), recordings and playback still work fine — it’s just that navigating through the guide and/or menus can get annoyingly slow/choppy.  In other words, get a system faster than what I have if you decide to go spring for an HDHR system! :).  Now, everything in the system should be fast enough, but it’s the processor that I believe is the issue here.  I used to have a HD HTPC setup using an AMD 64 3200+, only then I using an ATi HD Wonder PCI card, using OTA HD, and it worked GREAT — everything else was basically the same, and I was even using an inferior video card — an ATi 9600se.

The network and HDHR is setup so that the HDHR is plugged directly into the ethernet port on the computer — this way, I don’t have to worry about network traffic slowing down the streaming to the HTPC.  Now, doing it this way means I am not able to stream the HDHR to other computers in my apartment.  The reason I did it this way, as opposed to plugging the HDHR into the router, is because I was trying to get the fastest data transfer as possible seeing as how my computer wasn’t quite up to snuff.  (Ideally, you would have a faster computer, and then would just plug the HDHR into the router).   I also have a cable amplifier going into the HDHR, and I’ll speak more about that in the review below.

I then have the computer hooked up to the LCD TV using a DVI to HDMI cable, and then have the 6 channel audio (Front L/R, Rear L/R, Center & Sub) using three 3.5mm audio to Stereo RCA cables hooked to my Onkyo stereo.   See the mess of cables and electronic goodness:

Other than having a slow computer, setting up and watching HD with the HDHR works GREAT.  It’s very simple to setup — simply plug your cable line(s) into each of the two jacks on the back of the HDHR, plug the ethernet into the HDHR and your router, plug in the power, and you are done!  Then you simply download their “HDHR Manager” software, which will automatically detect the HDHR whether it is plugged into the router or directly into your computer.   After running through some setup and channel detection steps, you use VLC (a free, powerful media player) to watch the streaming HD and digital cable!  That’s it!

Using HDHR though the computer on my TV actually looked a little bit clearer than using my comcast Motorola DCTxxxx cable box — The HD content was a little bit sharper and better contrast (though that’s not necessarily due to the HDHR — it’s probably has to do with the computer), but it’s great knowing I don’t have to pay for DVR service anymore!

When I had the HDHR plugged directly into my router,  I tried viewing HD on two of my computers (dell m1210 and dell vostro 200), and it worked great — both computers played back perfectly, no hickups, GREAT picture, and all by simply using the HDHR manager software and VLC!  (the m1210 is a core2duo 2.0ghz w/geforce 7400 video, and the vostro is a core2duo 2.2ghz w/integrated video).

Now, of course, there are some downsides.  Not that it should be any surprise, but the signal quality coming into your house is very important.  Within the HDHR manager software, there is a signal quality, signal strength, and another meter that I can’t remember right now, and it is recommended that the signal strength be at least 90%.  Unfortunately, the wiring in my apartment complex is HORRENDOUS (splitter after splitter after splitter — and that’s BEFORE it even reaches the inside of my apartment!) and I was only getting around 70% signal strength.   Video playback through the HDHR kept dropping out, or skipping, and it took me 2 days to figure out the reason was due to the signal strength!  What I had to do was go to radioshack and get a cable-tv amplifier for $45 — I wasn’t happy having to spend another $45 on top of the HDHR (and video card..haha), but once I got it, everything worked great and I no longer cared!

Also, keep in mind that the HDHR will not get you all the channels that you get via plain cable tv — this is only for the broadcast stations (stations that you can normally get over an antenna), just in much better (digital and/or HD) quality.  To get standard cable stations, you are going to need an extra internal tuner for your computer (ie:  the NVTV that I have).   Another detail — you really don’t want to try using the HDHR over a wireless connection.  While watching the Non-HD content (just plain digital broadcast) should be doable, wireless speeds/quality just can’t really handle the streaming of HD content (okay, maybe if you have some crazy wireless setup, but not with most).

So would I recommend this to anyone that simply wants HD?  No.  If you just want to be able to watch some HD on your living room TV, your best bet would be to get a TV that has a QAM tuner itself, or simply pay the monthly fee for HD programming for your digital cable box.  However, if you don’t want to pay the monthly fee for basic HD, would like to be able to watch live HD or digital broadcast on any of your wired computers, and even be able to record basic HD with a HTPC (computer based DVR), then the HDHR is the way to go!  Especially if you have an old (but again, relatively powerful) computer sitting around, HDHR is a great way to put it to use!