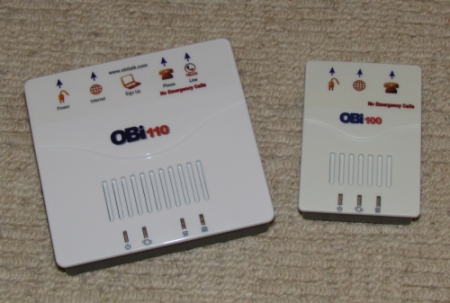 In previous posts, Iâ€™ve written about Google Voice (GV) and all that it can do and about how to utilize GV in conjunction with Gizmo5 to make free calls.  However, that party slowed once Google bought Gizmo5 and stopped taking new signups, and then it was completely over when they shut it down completely earlier this year.   However, the party can continue now that GV has enabled the ability to utilize Google Chat to make/receive GV calls in custom applications.  Various companies are taking advantage of this ability and this is where Obihaiâ€™s OBi110 for $50 (or Â£50) and OBi100 for $44 really shine.

So what exactly are these?

The Obihai OBi110 and OBi100 are essentially enhanced internet phone adapters (ATA/VOIP adapter) that allow you to use a normal land line phone to make/receive calls (using your internet connection) using various VoIP providers (phone service over the internet).  One of the main features that really makes Obihaiâ€™s devices stand out amongst other ATA adapters (such as the Linksys PAP2) is that they have the ability to directly utilize Google Voice as one of the phone service providers (without having to use any other 3rd party service or have a computer running). This means being able to utilize Google Voiceâ€™s features (free US/Canada calls, call forwarding, voice mail transcription, etc) directly from a traditional landline/home phone while at the same time having access to all the Obihai features such as call bridging, free obi-to-obi calls, and much more:

The devices themselves are quite small, especially the OBi100.  On the left/top is the OBi100 and the right/bottom is the OBi110: 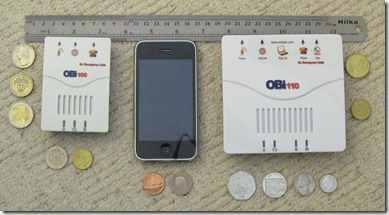 Why would you want one?

The main reason I bought one was simply to save on calls.  Google Voice allows free incoming/outgoing calls to the US and Canada, and very cheap UK calls (they recently lowered rates to UK mobiles â€“ itâ€™s now cheaper than any other VoIP provider that I use).  I work from home in the UK and deal with our US and UK offices all the time (and donâ€™t get reimbursed for phone usage), so this saves me an incredible amount of money.  I didnâ€™t want to sign up for an expensive UK land line calling plan, nor did I want to pay the price for a higher/unlimited cell plan, so being able to utilize the Obihai boxes for GV is perfect for me (especially since itâ€™s a no hassle setup and doesnâ€™t require a dedicated computer or similar to run it).

Prior to using an Obi, I set myself up a FreePBX system using the easy to install and use Incredible PBX.  Discussing IncrediblePBX would need a whole post (or more) by itself, but itâ€™s basically an incredibly supercharged Obi100 that runs on a computer.  It has so many features, and works great â€“ however, it does require a dedicated computer to run on (which would cost more than the Obi devices) and has a lot of features I would simply never use

So thatâ€™s one (big) reason, cost savings for calling from home, to get an OBi110/OBi100.  Here are some more reasons and sample scenarios in how you could/would want to use an OBi:

Is it easy to setup (with or without Google Voice)?

Most definitely, and itâ€™s quick too â€“ check out Obihai’s excellent step-by-step guide (and below is a very brief overview):

Besides the obvious differences in size, the only way they differ is that the larger and slightly more expensive OBi110 offers an FXO (or â€œlineâ€) port that the OBi100 does not:

An FXO port allows you to plug directly into your â€œactualâ€ land line provider (assuming you have one) so that you can have both your land line connection and your Google Voice/VoIP connections all managed and accessible through the OBi110.   Itâ€™s also useful to have the OBi110 if you have a land line, even if you donâ€™t have service, as you can (maybe) utilize it to make 9-1-1 calls if/when necessary (though you can also setup â€œE-911â€ service with various VoIP providers).   This way, all incoming calls from all your phone providers can be answered, and dialed from, a single home phone â€“ very convenient!

Since the OBi110 and OBi100 have been released, there have been tons of deals and general information threads on various forums across the web and many people always ask the same questions â€“ Here are a few of the more frequent ones:

What else these devices are not and cannot do:

There is SO much that you can accomplish with these devices and there are TONS of articles, reviews, guides, etc on how to use them and tips and tricks.  Most notable to me are the series of posts over at The Michigan Telephone Blog which goes through a very detailed review and how-to guides for setting up various things.  Obihai also has a good support system and very active user forum if you want any sort of question answered (or see if anyone else has the same question or issue).

One thing to note is that yes, one of the major selling points for these are itâ€™s simple integration with Google Voice. However, Google Voice has (so far) only stated that calls to the US/Canada will be free through 2011 with no mention as to what happens in 2012 (it may remain free, they may start charging â€“ who knows).  However, no one knows if theyâ€™ll stop the free party, but even if they do, I wouldnâ€™t expect it to be much (as there are other providers that offer unlimited US/Canada calls  for $3-4 a month, so I would think Google would meet, if not beat, those prices).  Plus, this works very nicely with any other VoIP provider out there (Sipgate US or UK, Call Centric, VoipFone, etc the list goes on ).

Itâ€™s only available from Amazon for now, so head on over there and pick one up:

Have any questions about using the OBi110 or OBi100?  Have you picked one up and want to share your tips and tricks?  Sound off in the comments below!