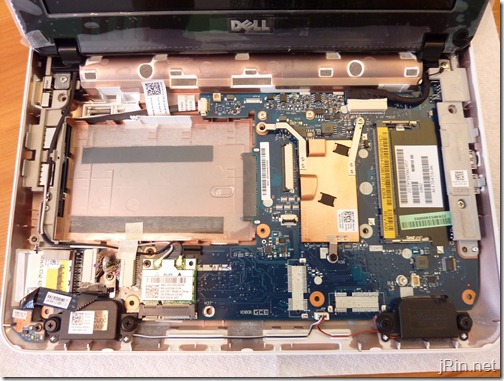 Just purchase a Dell Mini 1012 with the new Atom N450 chip? Want to upgrade the memory, hard drive, or pci-e cards but realized that Dell did not provide a service manual to assist in dismantling it (like they have for most other computers they sell)?  Luckily, itâ€™s as simple as removing 4 screws and the keyboard to replace the memory, and then 5 additional screws and prying off the palm rest bracket to get to the pci-e slots!

(note — should you decide to follow this guide, do so at your own risk â€“ I take no responsibility for anything you may damage in the process :))

Donâ€™t want to watch the video guide?  Continue on with the step by step picture guide below!

The first step is to remove the keyboard.  It is held in by (3) screws on the underside of the laptop, as well as itâ€™s data cable.  Start out by flipping over the netbook and removing the battery by pressing the clips left and right [blue] to unlock it (then, remove it).  Next, remove the (3) keyboard screws [red] â€“ the one in the middle may not easily come out, but you need not worry about it as it will fall out once you actually remove the keyboard.

— while youâ€™re at it, go ahead and remove the (4) bottom screws as well (green) â€“ these hold on the palm rest and youâ€™ll need to take them out eventually anyway —

With the screws removed, flip it back over and open the screen to like a 90 degree angle and rest the laptop on itâ€™s side.  Take a small screw driver (or anything similar) and stick it through one of the left or right (depending what side the laptop is resting on) screw holes.  This will push the keyboard out a bit so you can grab a hold of it on the other side in order to pull it out.  Donâ€™t pull the keyboard too far away because it is connected to the motherboard by a cable. 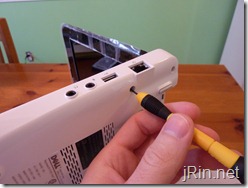 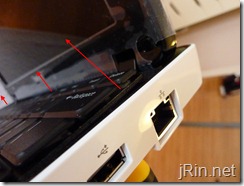 With the keyboard a bit loose, make sure it is free from the two clips on the left and right (red circles), and then flip it back over onto the palm rest (so the keyboard keys are resting on the palm rest / touch pad), again, remember that it is still attached to the motherboard via the data cable. 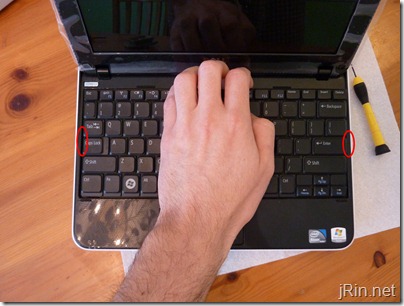 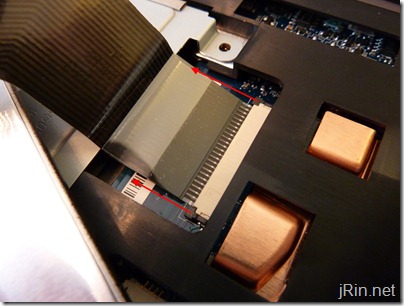 Simply pull out the power button cable from the motherboard (just pull up on the cable) â€“ it is a little snug, so it will take a little bit of force,

Then, pull/push up the latch holding down the touch pad data cable, and then pull it out: 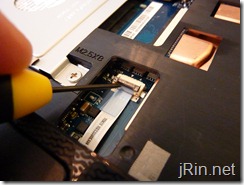 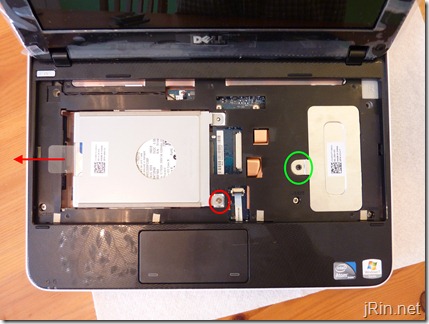 Remove the memory (and later replace this 1GB stick with a 2GB stick!) by pushing the (2) clips away from the stick (and the stick should then pop up). 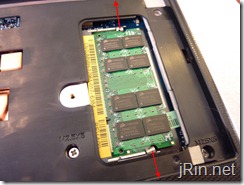 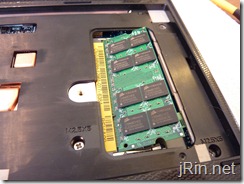 You will probably hear a lot of snapping and cracking during this process, but it will be okay!  Start out by getting a credit card, lift up on the middle left part of the bezel (from the â€œinsideâ€) and stick the credit card in the left side: 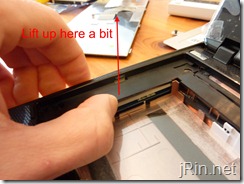 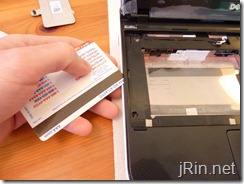 Continue to slide the card all around the palm rest with just the tip of the edge/corner of the card â€“ this is when youâ€™ll probably hear some snaps, crackles, and pops.  Itâ€™s just the palm rest being released from the clips.

At this point, the palm rest should be fairly loose and you should be able to lift it up (from the front) only about an inch or so, as it is still attached near the screen: 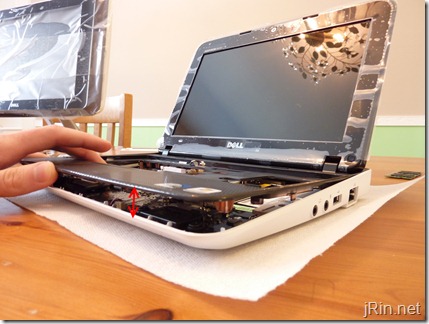 Now, all you need to do is simply raise it up a bit more until you near it snap/crack, which should just be it being release from the clips at the screen, and then pull it free:

Congratulations, you now have access to the motherboard where you can replace/remove the mini pci-e cards / etc!  To put it back together, basically do everything in the reverse order.

Unfortunately, I did not order mine with Bluetooth, TV tuner, hd decoder, etc so I am unable to show you what those look like â€“ but as you can see, there are locations on the mother board for those headers (keep in mind, it appears that if you don’t order the netbook with bluetooth or the mini pci-e cards, the headers will NOT come on the motherboard, meaning, you cannot easily upgrade in the future):

for those of you looking for cheap 2gb memory sticks, all of the below options will work:

Sounds off in the comments about how dismantling and upgrading goes for you or if there are obstacles not mentioned here due to other pci-e cards being present — Good luck!