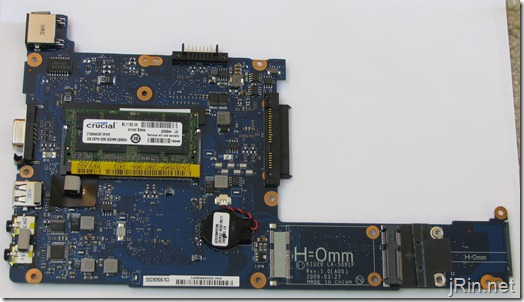 As opposed to simply providing a removable door (like they did for the mini-card) to upgrade the memory, Dell decided to make it difficult by requiring you to dismantle the entire laptopâ€¦ (but what do I know, maybe it would affect structural integrity or something to add a door?). 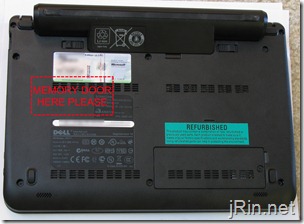 So, in light of this fact, here is a step-by-step how-to video (and pictures) on how to upgrade the memory

!  All you will need is time, a set of mini screw drivers, and patience!

While following this video, I would highly recommend having the Dell created service manual to follow along in case anything shown here is unclear/etc:

Since YouTube caps videos at 10 minutes, I broke it up into:

Taking it apart and adding the memory:

and then another putting it all back together:

Or, or those who prefer a guide using pictures as opposed to video:

1.  Start out by removing the battery by sliding out the battery lock clips, and then pull the battery straight out.  Then remove the (3) screws holding in the battery and the (1) screw securing the mini-card door, and remove the door. 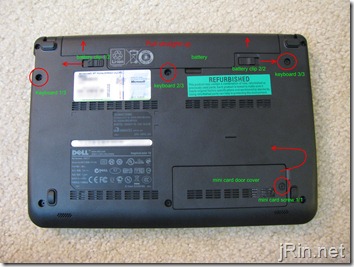 2.  Remove the mini card.  Gently pry off the two antenna cables by, for example, placing a small screw driver underneath the cables where the gold metal and cable meet â€“ then softly prying it up.  Then, remove the single screw holding the mini card down, then pull out the card. 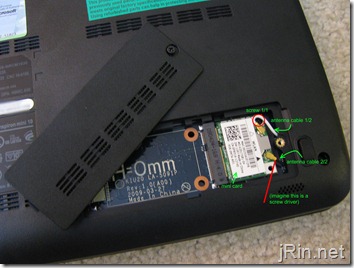 3.  Remove the keyboard and itâ€™s ribbon cable, as well as the ribbon cable for the touchpad.  Youâ€™ll need to basically use a very thin flat head screwdriver, credit card, etc in order to â€˜pry upâ€™ the keyboard from the center near the screen.  Once you are able to get your fingers underneath it, just pull up on the right and left sides until the laptop is free: 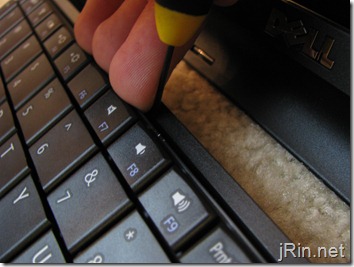 (there are small clips holding the eayboard in on the right and left, just pry the keyboard up as if there is a hinge at the palm rest and itâ€™ll come loose).  Donâ€™t pull the keyboard too far from the chassis as itâ€™s still connected via itâ€™s ribbon cable: 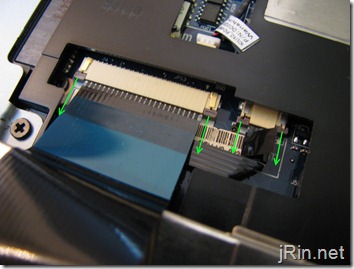 4.  Remove the palm rest.  This can be a bit frustrating, but basically you want to use your thumbnail / thin creditcard to start prying from the left and right edges, where it meets the bracket: 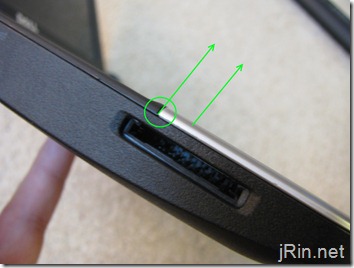 5.  Prep for palm rest bracket removal.   First, go ahead and remove the 1 screw holding in the hard drive, and slide it out (blue).  Then, unplug the 3, or 4 if you have bluetooth, cables (green).  Finally, unscrew the 4 screws securing the palm rest bracket from the top (red). 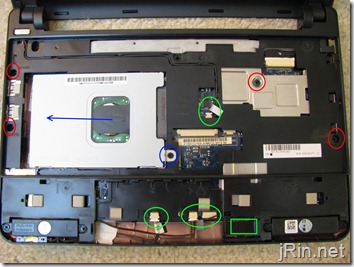 Turn the netbook over and remove the 5 remaining screws securing the palm rest from the bottom: 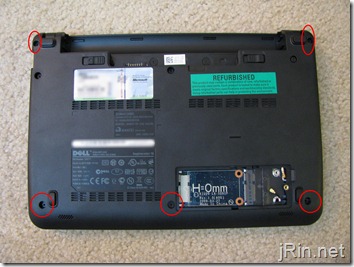 6.  Actually remove the palm rest bracket.  Dell suggests starting from the hinges and working down, but I was unable to undo the clips here to start.  So instead, I started at the speakers (which are already loose), and started prying off the bracket from here.  Basically, just start pulling the entire bracket up, working your way from the palm rest area up towards the hinges, until it is removed.  (that being said, once I started getting the bracket unclipped half way to the hinges, I was able to pry off the hinge-area): 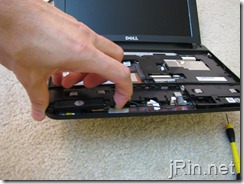 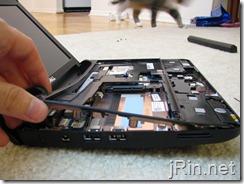 7.  Prep system board (motherboard) removal.  Almost there!  Now you need to unplug the 3 remaining cables (green) and 2 screws (red).  It may not matter, but when removing the display cable (top right), pull from the middle of the cable, as thatâ€™s where all the wires are bunched: 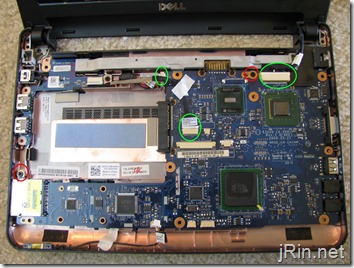 8.  Remove the motherboard.  The board is now completely loose from the chassis and can be removed!  Be careful not to nick it on anything while pulling it off, but itâ€™s relatively easy not to.  Flip over the board, release the memory and pop in your 2GB stick: 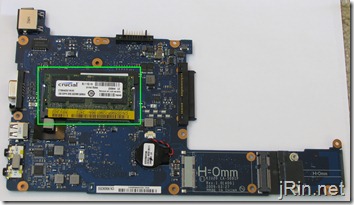 9.  Put everything back together.  Basically, just follow all theses steps in reverse, power on the system, and enjoy your 2GB Dell Mini 10v!

Have any questions or run into problems?  Find an easier way to pry apart the palm rest bracket or etc?  Let everyone know in the comments!

For those of you who haven’t bought a 2gb stick yet, there are plenty on amazon that would work fine (too bad prices for ddr2 memory aren’t as cheap as they used to be) – I will keep this list updated with the cheapest amazon memory prices as I see them: