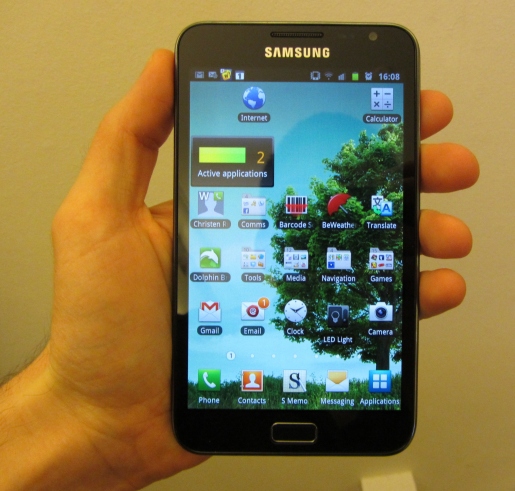 I originally planned to write this review a couple days after I received my Galaxy Note in late October, but I decided to wait.  After using it for the first couple minutes, I didnâ€™t like it as much as I hoped because itâ€™s larger size made it feel a bit awkward to hold and use with one hand (at least, in my hand). It just simply didnâ€™t feel right.  At the same time, however, I was genuinely excited by itâ€™s specs and feature set such as 1280×800 resolution, 1.4GHz dual core Exynos processor, huge battery, stylus, camera, etc.  I didnâ€™t want to not like it.

So, I decided to give myself time to try and get accustomed to it and then see how I felt about it after having used it for a while.  After a little over two months of usage now (a little longer than I had originally planned), Iâ€™ve really put the Note to use: traveling to France, Germany, and the US, multiple long train/plane rides, many days of using it as a sat nav, using it as a portable media player, extensive web browsing, playing games, etc.

Note (ha), this review is going to focus on itâ€™s physical size, as that was pretty much the only thing I did not like.  The GPS is fantastic (best from any phone Iâ€™ve used), battery life is great, performance is snappy, etc, but it was the fact that it was so big that really put me off.

So, has using it for two months changed my initial impression?  Read on (or watch) to find out!

Itâ€™s big.  And thatâ€™s just exactly what everyone, friends or strangers, say whenever they see me using it: â€œWhoa, thatâ€™s a big phone!â€, â€œIs that a phone?â€, â€œDude, does that fit in your pocket?â€ (yes, it does).  And itâ€™s that which seems to be the main factor that makes people like the Note or not, which makes sense and I agree with, to a point.  Again, itâ€™s big, but with that thereâ€™s a question to ask which is: is it a big phone, or a small tablet?  It is indeed too large to be a true one handed device (at least, for my hands), but you need to keep in mind that itâ€™s not necessarily meant to be one.  Every phone youâ€™ve likely been using in the past has been a phone that fits nicely in your hand, so itâ€™s going to be a big change (yes, I know the Dell Streak is of similar size and if coming from that phone, then you already know what itâ€™s like).

As shown in Samsungâ€™s own ad, they too say itâ€™s not just a phone, but also a tablet:

Is it a phone? is it a tablet?

When I first heard about the Note, I thought â€“ this sounds great – it has a huge, high resolution screen unlike other phones (such as the Galaxy S 2, iPhone 4S, etc), so itâ€™ll be awesome for browsing the web and watching videos while still being pocketable â€“ and indeed it is!  Iâ€™ve used it now on long haul train and plane rides, while on vacation, at home on the couch and in bed, and itâ€™s wonderful for media and browsing.  I also had the hope that it could be my all-in-one device, meaning, I wouldnâ€™t need to carry around my laptop and/or tablet (either the original 7 or 10.1 Galaxy Tab) in conjunction with my phone when traveling.  Normally, I would take my tablet (or Dell 11.6â€ 1121) when on vacation or taking long train/plane rides to be my main movie/tv show player and web browsing machine, as well as my phone for maps/gps, music, and games.  I saw the Note as being the opportunity to combine my laptop and phone into one device.

So has itâ€™s size met my expectations and desires?  Yes, but also a bit no.  As mentioned earlier, itâ€™s not necessarily meant to be a one handed device, though Iâ€™ll admit that I was expecting (or hoping?) that it would be.  With my Galaxy S 2 (and all other smaller phones), the way I hold a phone is by having the bottom of the phone rest on my pinky, with my other fingers wrapped around to the other side, which then leaves me free to use my thumb to get everywhere on the screen: 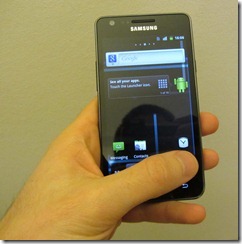 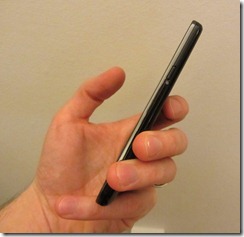 With other (non Galaxy Note) phones, I am able to hold them in my hand and reach my thumb up to swipe down the notifications menu, reach to the top right corner app on the home screen (though just barely on the SGS2), and reach the â€˜backâ€™ button in the bottom right corner. 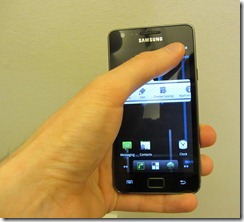 However, on the Galaxy Note, this is not quite possible for me.  Now, I say not quite possible, as opposed to flat out not possible, because I can still reach up and pull the notifications menu, or tap the top right corner app on the home screen, etc â€“ I just canâ€™t do so without having to shuffle it around in my palm or without loosing my firm grip on the phone.

For example, here is how I â€˜normallyâ€™ hold the Note (and any other phone) when just simply using it: 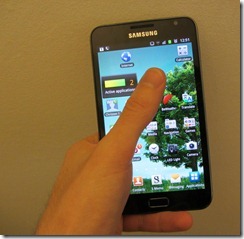 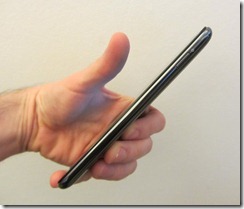 However, when I need to reach the top/top right of the Note, I have to slide it down my hand a bit (and therefore no longer have it resting on my pinky) in order to do so: 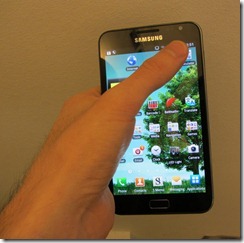 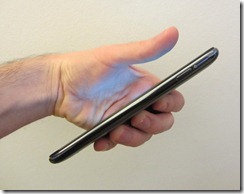 Okay. That all being said, for the first couple days of using the Note, I wasnâ€™t all that happy with needing to adjust the way Iâ€™ve always held a ; it didnâ€™t feel right to have to change my â€˜phone gripâ€™.  However, after using it for a while, Iâ€™ve found my self holding the Note differently without giving it any thought, I simply hold it differently to compensate for itâ€™s size and go back to my â€˜old phone gripâ€™ when using any other (smaller) phone.  I simply slide the phone up and down my hand/fingers to reach the places I couldnâ€™t reach with the way Iâ€™ve held phones in the past and it has become natural to me.

Yes.   I donâ€™t wear baggy pants, though also not skin tight or skinny jeans, and I donâ€™t have a problem with it.  It easily fits in my pocket, doesnâ€™t restrict movement, and is easily removed from my pocket. 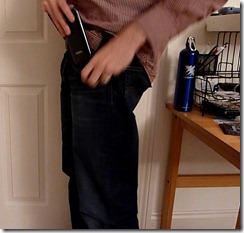 It even fits in a shirt pocket:

Size comparisons to other devices:

Here are just some simple photos of it next to other devices: 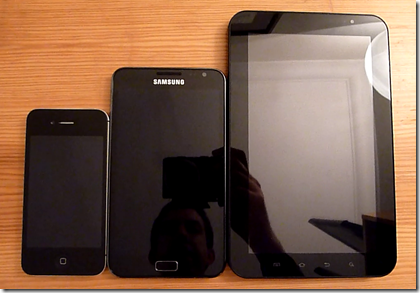 In short, after taking a few days/weeks to really get used to handling a larger phone, I have zero issues with itâ€™s size and now am that much more satisfied with the Note.  Do you have a Note and also had initial reservations with itâ€™s size but now youâ€™re okay with it?  Or perhaps you never got used to it?  Let folks know in the comments below!